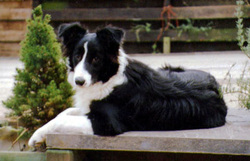 This isn't a serious website about beautiful show dogs. This is principally a website about my Border Collies and my other dogs, and the fun we have had together doing either sheep herding,  Agility, Flyball,  Shutzhund, Obedience, Search work, or showing etc.
I've been training dogs of all ages and breeds for over 65 years, both professionally as a trainer in clubs/groups for obedience (not competition obedience) working trials, search & rescue, sheep dog work, agility, and since 1999, flyball.  Also sorting out dog's problems. (which is usually an owner problem!!)  Today they would call me a behaviourist.  Before that word was created, we would call it assessment, education, rehabilitation and training (of both dog and owner, with usually the owner needing much more "education" than the dog!!!!)  I would question "why" a dog was behaving in the way it was, and treat the cause, not the "symptoms."

I won't say that I have "worked" my dogs, because it has all been fun and pleasure, and if any of us wasn't having any fun doing whatever we were doing, then we just stopped doing that and did something else.   But I can't conceive having a dog and not sharing doing something together.

And for those of my dogs that thought sheep were for roasting and eating with potatoes, Agility just too energetic, Obedience too nit-picky, Shutzhund too serious, Flyball too crazy, Showing too boring, Searching not energetic enough, then they were, are, and always will be my best friends.  I'll be making updates and additions, so be sure to check back for the latest!

A LITTLE ABOUT ME

​Just a little about me. I was Born in 1936 (Ye dOgs, am I really as ancient as that???). Warrington, Cheshire was my actual birthplace.
My Father was in the army and wherever he went we had to follow, so we lived in Dover, Folkestone, Halifax, Oxford, Portsmouth, Derbyshire, to name but a few places.
The first dog I met and touched bit me! Badly!  A big, black Labrador cross.  It made me realise even at that young age, knee high to a grasshopper, that you don’t throw your arms around a dog that is at least twice your size without asking it first “Is it o.k. if I cuddle you?”

The second one, a very handsome Rough Collie was so exuberant it jumped up on me and knocked me backwards into the fireplace where a nice hot coal fire was burning in the grate and I got burned.  Lesson number 2, don’t let dogs jump up at you if you are standing in front of an open fireplace with a big burning fire in it:-)

The very first dog that really belonged to me was a Jack Russell cross called Barney. Barney had epilepsy and he only lived for 18 months until the day he died during an epileptic fit by the side of the canal.
Then one day my father brought home a black and white dog called Rex. A Collie.
He was an adult when he was brought into the home and was only with us for a couple of weeks, then one day he wasn’t there. My father had got rid of him. How and where I don’t know but this became a regular pattern in the household.  Dogs and several cats would appear then disappear.  We had crossbreeds, German Shepherds (Alsatians), Afghan Hounds, etc.  I was too young to understand the reality of what had probably happened to the dogs and to this day I fight against animal cruelty and over the years I can’t recall how many dogs I have rescued and rehomed. Over the past several years it has been mainly Border Collies and working sheep dogs but there have been other breeds or mongrels.

If you would like to help these abandoned dogs in any way at all, you will find links on my website that will lead you to various rescue organisations.

We finally settled in Liverpool,  which was not the most beautiful, nicest place in the world even in those days, but the people were, and are, the warmest, funniest and most generous people I know.

Since those days I have lived in Manhattan, (New York), Italy, France, Belgium and for 37 years I lived in Switzerland before coming back to the UK in 1995.
I worked at the Refuge  Ste.Catherine (Ste.Catherine Animal Shelter) for just over 7 years. It  is situated a few miles outside of Lausanne (Switzerland) in the middle  of a forest but near the Lausanne to Bern main road. I started as a part-time kennel maid and after a few weeks was working full time. By full time that means we started at 7 am, a lot earlier when there was snow on the ground because it had to be cleared before we started work in the kennels.
We  finished, if we weren't doing night duty, at the earliest 6 pm. If we  did weekend duty we went in on Saturday morning and worked through till  Monday evening 6 pm.  Alone from Saturday 6pm until 6.30 am Monday  morning. The refuge was open from 9 am till 6 pm non-stop, Monday through Saturday so that meant on Sunday, whoever was doing weekend duty was doing the work of 4 people, all by themselves.. We would start by  putting the dogs out in their parks. Then cleaning the kennels and  catteries started at 7 am.

The veterinary surgery had to be cleaned and disinfected from any emergency that had happened during the night, and there was always an emergency during the night, every night. Then the dogs and cats had to  be fed. No tinned or dry food. The local abattoir kept us in big frozen 10 kg blocks of meat and tripe. This had to be taken out the night  before so that it could thaw. Then there were the veterinary cases to be looked after.
There  were never less than half a dozen cats and several dogs hospitalised.  The dogs and cats in the pound kennels had to be cleaned and fed. When  all this was done, in between answering the phone and going to unlock  the gate for people who had found a stray or brought in an unwanted or injured  animal, there were a couple of hundred chickens and about 40 geese to look after. Collect the eggs, muck out, then if you had time you might be able to make yourself a cup of tea.
On top of weekend duty we were obliged to do a night duty during the week. i.e. go in Wednesday morning and you didn't get home till  Thursday evening. Our vet, Professor Samuel Debrot was also the  President of the SVPA (Societe Vaudois pour le Protection des Animaux)  and was also our superior. The Professor was always on call night and  day and we also had to train to be veterinary nurses if we weren't  already.

The  refuge housed on average 80 abandoned dogs and 40 cats, often many more because we also had the 'special cases' like the dogs and other animals  that had been sequestered because of cruelty. We looked after them until the owners had been prosecuted, often not being allowed to own any  animals ever again or for a certain amount of time which meant these  animals had to be found new homes but if they were too old, sick, or we  didn't have enough room, were put to sleep.
We also received all sorts of injured wildlife. Deer, Castors,  Weasels, Hedgehogs, to name but a few. The only time we had to ask for  outside help was when they brought in a very old, but very aggressive  lion that had been sequestered from a travelling circus. A special  wildlife park had to be found to house it as our residents were  absolutely terrified as you can well imagine.

We all had to be  vaccinated against rabies because at that time rabies was endemic in  most of the European countries, and several animals that were brought  in had the disease.

We were obliged to have our Diplome/Certificate pour Gardienne d'animaux.  (Animal Keepers Diploma/Certificate). To pass this we had to go to  course studies at Lausanne University EPFL. Not just courses to look after dogs and cats in shelters and  kennels/catteries but also pet shops, laboratories, breeding kennels,  bird sanctuaries and farm stock etc.. These courses took several months  but we still had to find time to go to the refuge to work. On top of  that you had to have at least 3 years practical work behind you with  references from the people you had worked for (I had many years practical work). Veterinary knowledge was also compulsory. It is now  much easier. You only take the course for the category you need, not all of them, but they now need 5 years practical experience unless it has  now changed. I am very proud of that certificate, I worked hard for it.

We had a good salary at the Shelter because our superior, Professor  Samuel Debrot told us "If I give you a good salary I expect you to work  long hard hours and for that work to be exceptionally good". He really  got his moneys' worth. He would never take on benevolent helpers.
The bonus was we could all take our dogs to work with us. They had  special big grass parks for them with shelters and we were allowed to  have them in the bedroom, kitchen and lounge with us when we were doing  night or weekend duty. We could walk them and look after them in our  breaks and at lunchtime. I won't mention how many dogs I used to take  but there were sometimes more and sometimes less. For puppies it was fabulous. You couldn't get better socialisation than that.
There was a good sized bedroom and a bathroom above the kennels which  as you can imagine kept sleep at a minimum. There was a large tiled  lounge downstairs which never got used except for meetings. We were kept too busy to be able to sit and read or rest. There was also a well equipped kitchen for staff at kennel level.

I remember one Saturday night having dropped into bed well after  midnight when the vet rang to say he was bringing in a St.Bernard bitch  that had puppies rotting inside of her. Between the both of us there was  no way we could lift the dog onto the operating table so the operation  was done with the bitch lying on sheets on the floor. We finished in the early hours of the morning. I was on my knees with fatigue and I had  Sunday in front of me working alone in a kennel that was overflowing  with dogs, cats, the sick bay, the pound, clean up the operation mess,  40 geese, a couple of hundred hens and about 25 tortoise!

It was a hard school but a good one. When I finished working there I  had reached the position of sub-director. I still had to do exactly the  same work as all the other kennel staff but I had the responsibility  of taking the blame for whatever anyone had done wrong when the big  chief' wasn't there. The rise in salary was hardly worth mentioning.

I loved it there. It was harder emotionally than physically. A good  nights' sleep will refresh the body but nothing can take away the  memories  of seeing what humans can do to animals. 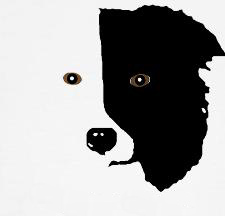